The school office staff at the School of Mathematical and Physical Sciences at the University of Sussex will be bringing in their teddy bears for a Pyjama Party on Thursday 12th March. There will be cookies, cakes and hot chocolate on sale in the foyer to raise money for local charity Crossover. Crossover works with homeless people on the streets of Brighton to ensure that they get a hot meal while also providing clothing, support and words of encouragement. Please come and enjoy some home baked goodies and donate to this worthwhile cause.

We will also be taking donations of clean clothing, sleeping bags and bric-Ã -brac. Please check with the school office about what we can accept if you are unsure 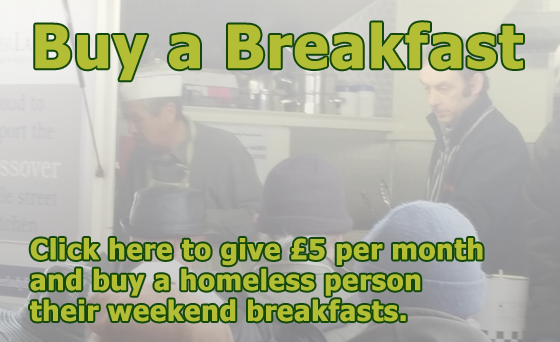 For only £5pm, you can give a homeless person a breakfast each weekend.
Click here to sign up today.

Hot off the press! Help raise funds for Crossover – for free!

All you need to do, when you shop online, is go through this link first. Then you’ll be raising money for the work Crossover do – without paying any extra! It’s so clever.

In the build-up to our Fizz and Chips event on May 16th, we now have (currently) 4 lots online available for online bidding!
These include two guitars, a trip to the Houses of Parliament and a weeks’ stay in a cottage in the south of France.
For more information, visit our Facebook Online Auction Album! 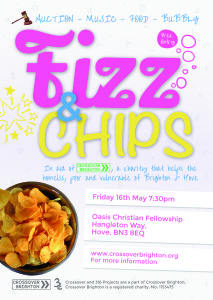 There will be a selection of fizzy drinks as well as chips in difference varieties…but more importantly there will be a Auction  with some really special items going under the gavill!!!

The venue is Oasis Christian Fellowship, Hangleton Way, Hove – but please mark the event in your diaries as we look forward to sharing some of the Crossover projects with you.

Breakfast for the Rough Sleepers

Trialed on Sunday 9th, an early morning breakfast was hosted by Crossover for the rough sleepers at Circus Street. This proved so successful that Crossover decided to continue trialling this over the coming months and see how it develops.

Currently there is a seven-church night shelter, which hosts around 15 rough sleepers which provides them breakfast. When this ceases at the end of Winter (March) there will be no replacement for Sunday breakfasts for those guests. Crossover will be the only food run on a Sunday daytime. Not having food runs over the weekends can prove dangerous, particularly for substance users, a Sunday morning Breakfast may just save a life!

For further information on this, or any other Crossover project – please do contact us on the contact page or donate to help fund the work we do. Thank-you.

We're in the news!

With the launch of our new Street Kitchen, Kitty, we were featured in the local newspaper – the Argus.
You can read the article online here: http://www.theargus.co.uk/news/10530439.Counting_cost_of_homeless_charities_in_Brighton_and_Hove/

Homeless support agencies reported that around 3,500 people slept rough in London last year, which is almost half the number of rough sleepers in the whole of the UK. The life expectancy of a long-term rough sleeper is only 42 years, compared to 79 years for the average UK citizen.

A homeless rough sleeper is 35 times more likely to commit suicide than the average person in the UK.

One of our supporters, Jonathan Bridges is running to raise money for Crossover. He writes:

“After working in an office for over 9 months with a man who ran 52Marathons in a year and many people who have run marathons and swam for miles upon miles. I’ve finally decided it’s my turn to do something unnatural for any human body.

The average life expectancy a long-term rough sleeper is 42. My last name is BRIDGES. I HATE (but secretly love) the word HASHTAG.
My brain can only put three things together….so I’ve come up with…. #42BRIDGES.

At the beginning of June I’ve decided to ‘run’ over 42BRIDGES in and around London – covering a total distance of over 34miles! mad. Mad. MAD. I KNOW!

I’m raising money for Safehaven (a weekly Saturday soup kitchen supporting the homeless in Brighton) and Crossover (a homeless charity also based in Brighton who wish to buy a burger van so they can deliver food to the street community). I volunteer at Safehaven nearly every week and am always astonished that what I would consider to be nothing can mean so much to someone.

If you wish to read more you can view my blog at: http://42bridges.tumblr.com/

You can view the route at: http://www.mapmyride.com/gb/richmond-eng/42bridges-draft-route-184682832
(I’ll be starting at Richmond Bridge and (hopefully) ending up at Tower Bridges).

I’m not one to ask for money, but if you wish to sponsor me, I would greatly appreciate it and the thought of what that money could do will keep me going.

Feel free to pass this around to whomever.

Many thanks for reading and any support given,
Jonathan”